I can no longer reach outbound connections. I have tried to ping multiple times, and remote servers are not reachable that use Tailscale for Active Backup For Business.

I have followed the steps on the Synology outbound article multiple times. (Access Synology NAS from anywhere · Tailscale)

Firewall on NAS is disabled. (not publicly exposed)

I can reach inbound to the NAS fine.

@H123 were you able to figure this out? If so, could you share your solution?

@zetsueii
Haven’t had much time to work on it, but still not working for me. Normal troubleshooting steps for the issue from Tailscale site don’t seem to make a difference.

I’m going to try to upgrade Tailscale on another Synology NAS tonight that is on the prior update. Maybe that will give an indication if it is the DSM update or Tailscale PKG.

No response from Tailscale on the forum yet.

Replying so I can keep track of this issue. Same happening here.

Tried the newest Tailscale PKG update with another Synology NAS (DS220+) on DSM 7.0.1-42218 (pre “Update 2”) and it works after the normal “outbound configuration steps.” So it definitely seems that Version: 7.1-42661 Update 2 is breaking something.

Same issue here.
Problem with site to site connections using Synology NAS - Tailscale About articles (troubleshooting, info) - Tailscale.
I’ll have a play with RRAS on windows servers with tailscale clients installed over the weekend. Probably an exercise in frustration but what the hell.

Received a reply from support suggesting to use

instead of sudo setcap. I tried that but it didn’t work for me. I am also running Synology on Update 2. Anyone else?

On DSM update 2, I did both the setcap and configure-host steps but no luck, unfortunately.

“sudo /var/packages/Tailscale/target/bin/tailscale configure-host” and then the “sudo synosystemctl restart pkgctl-Tailscale.service” command that it returns seemed to work for me. Ping works and now I can reach Hyper-V hosts for Synology ABFB backup. Odd that it doesn’t seem to be working for everyone. As stated before I’m on update 2 as well. 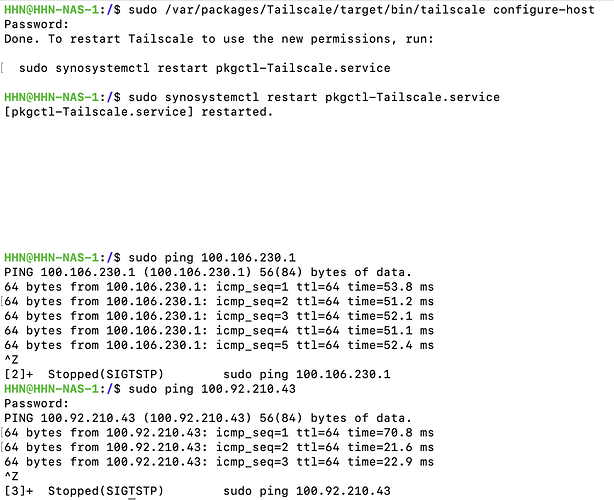 Thanks for the update. Interesting, I’ve done it now and it is working for me as well.

The different is that I have removed the routes announcement from the Synology node.

Still not working for me. Could you explain “removed the routes announcement from the Synology node”?

Same here @captgoodhope. I can confirm Tailscale is running with userspace-networking mode rather than hybrid.

The extra wrinkle for my setup is that Tailscale is telling me that the client on my Synology box has expired (a couple of weeks ago by the look of it) and I can’t figure out how to update that configuration/certificate.

Okay thank you. I don’t have this setting, mine says This machine does not expose any routes.

Looks like a permission issue was causing my problem but changing /dev/net to 0755 and restarting Tailscale did the trick! Taken from: Synology DSM7 Cant ping External (already ran steps) · Issue #4928 · tailscale/tailscale · GitHub

That worked! Thank you!